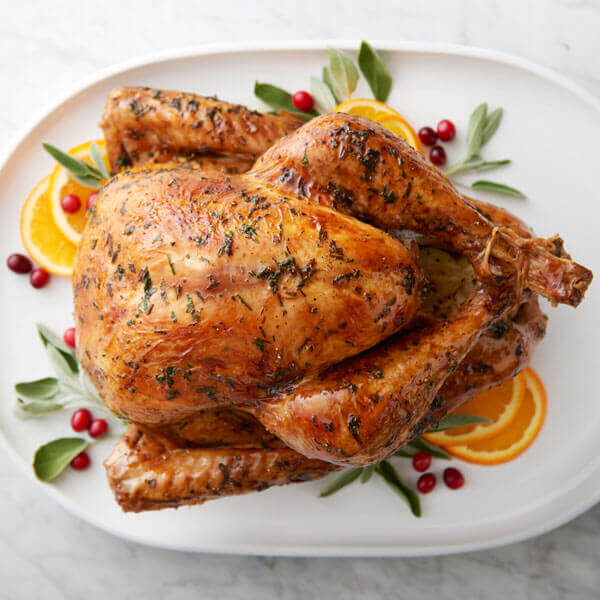 The holidays are coming and for most of us that means cooking up a whole turkey. We aren’t going to beat around the bush, the pastured birds coming out of Garoleen Wilson’s JHawk Farm in Kansas are the best around.

At JHawk Farm they raise Red Breasted White turkeys, the same type of birds you find in the grocery store. But these ones live a much better life. In fact, after they are 4 to 6 weeks old they leave the brooder go on to the pasture, where they live out their days roaming around, scrounging fro bugs and just being turkeys.

“Our turkeys have a lot more freedom and space, and I have about 50 birds on an acre,” says Garoleen. “They can graze more and eat more bugs, so they don’t grow as fast as birds raised in a commercial situation do.” 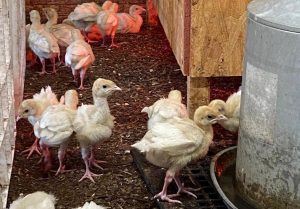 Why does it take so long to grow this fantastic birds? Well, says Garoleen, it starts with them needing more care when they hatch. “They are more fragile than chickens, and that’s why we keep them in the brooder longer,” she tells us. “Once they are feathered out and ready to go to pasture then they are almost bulletproof.”

Another reason these turkeys take more time and resources to raise is because they are ferocious grazers and require a lot of room and need to be on fresh pasture more often than chickens because of it. This is why the turkeys get moved ever single day to a new plot of land. But while it takes work to move the flock, the turkeys benefit from eating local foliage and bugs and getting a lot of exercise. In turn, we benefit too because it makes the birds healthier and the their meat taste better. 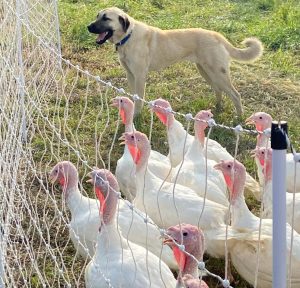 When Garoleen started with turkeys she got ten poulets, with the idea that she would discover if she liked raising them. Turns out she does, and over the past few years she has raised more and more. Each turkey takes between 12 and 16 weeks to fully mature and be ready to process, compared to chickens, which are ready after about eight weeks. When the turkeys are done growing, each bird weighs around 12 to 14 pounds.

The season for turkey is short too. One issue farmers face comes with processing, most meat companies only take turkeys in October and November. Then there’s the land issue. Garoleen says that after couple freezes the birds don’t have a lot of forage to forge for, and the water supply constantly freezes. This is why she only does one flock of turkeys a year and doesn’t raise her pastured chickens between October and May.

Get Your Turkey ASAP 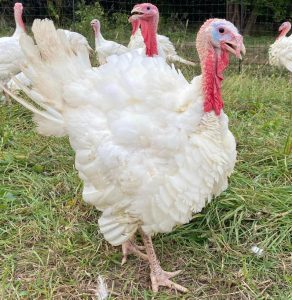 Unfortunately this year part of JHawk Farm’s flock didn’t make it, so the supply is limited. But, lucky for Locavore Delivery subscribers, you can reserve one as soon as we get these pastured turkeys in. The come frozen and vacuum sealed. Each bird weighs between 12 to 14 pounds, which serves around eight to ten people, the perfect size for that holiday gathering.

Don’t hesitate to order a turkey soon, we have been waiting all year for these birds to land so we can share them with our customers. And, when it comes to the JHawk Farm pastured turkey, it’s well worth the wait.